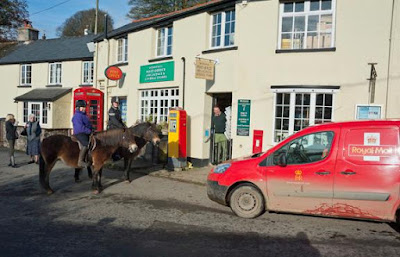 
and Landacre where the ponies enjoyed a short breather while cooling their feet in the Barle. 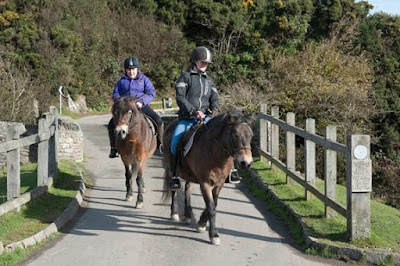 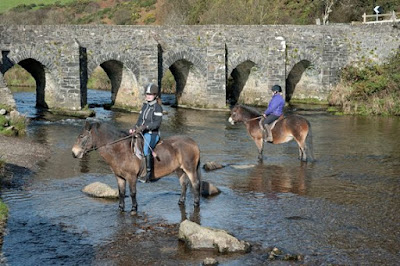 Helen handed Tony Howard a letter outside the post office where he has been postmaster for the past 20 years. 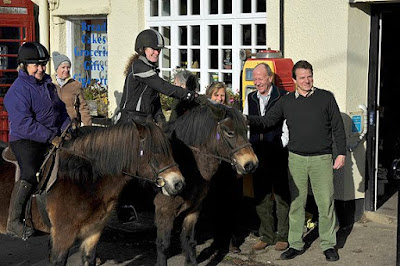 Until the 1970s the post was routinely delivered on foot or horseback over distances of up to 15 miles. Using maps and material from the Society’s Dulverton Resource Centre, the Society is piecing together the history of the postal service on Exmoor. Helen said “…. as a horse rider I’m fascinated by the role horses and ponies have played in bringing news and information across the moor. This is also a wonderful opportunity to work with the Exmoor Pony Centre and highlight how hardy and useful the Exmoor ponies are.”

Trekking may have finished for the winter but some of our riding ponies have been showing their versatility by getting involved with things literary and historical.

Pony Tom was guest of honour when, early in November, about forty people gathered in the Green Room at the Pony Centre to celebrate the launch of Dr Sue Baker’s latest book, The Exmoor Pony Chronicles; a collection of stories and reminiscences about Exmoor ponies and the Exmoor families and other people connected with them.

Tom played a starring role as a pack pony helping to deliver the books. 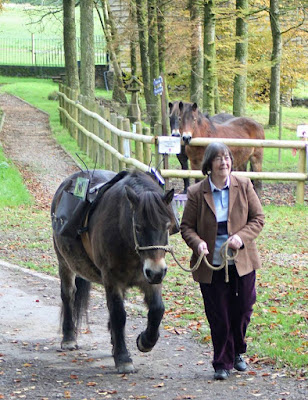 He also appears on the front cover as a traditional pack pony, with handlers in full period dress, taking part in the 2015 ENPA Mosaic Project Youth Walk across the route of the Exmoor Perambulation, the traditional long-distance walk dating back to the time of Edward 1st.