Some of the foals we took in over this winter are now looking for homes. They are all gelded, vetted and happy to wear headcollars and be led.

If you would like to home or foster one of our ponies, please get in touch. Details of all our ponies for homing are on our website. 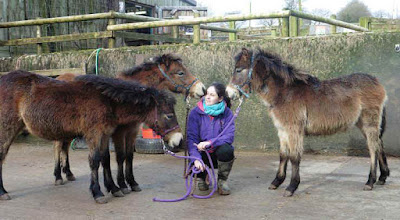 Here are three of the ponies looking for homes.  Shandy, Rio & Tango with Linzi 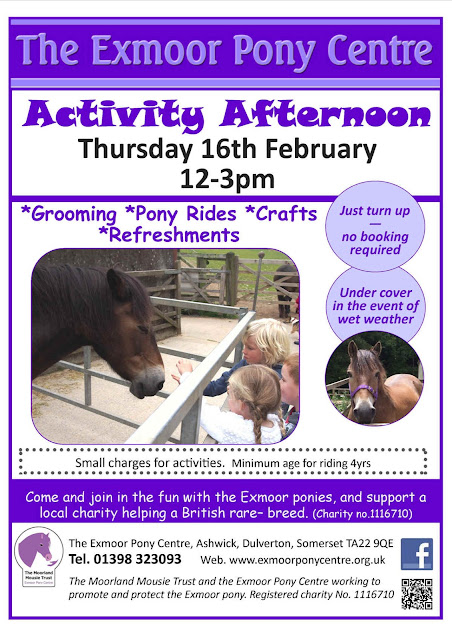 
Work at the Pony Centre doesn’t stop even though its chilly winter time. The ponies certainly keep us busy and warm.

In Mid- January staff at the Centre were preparing for ten ponies to travel to a new home with Durham Wildlife Trust at their Rainton Meadows Reserve. The time to say farewell came on the 17th January with the day of the move starting at 4.30 in the morning on Exmoor and by the early afternoon they were arriving to a crowd of people all eagerly awaiting their new four legged lawn mowers. Durham Wildlife Trust became interested in using the Moorland Mousie Trust for their Exmoor pony needs when they saw how other organisations in the north of England were using the charity and its ponies for conservation grazing. The ponies will be helping to improve habitat on some of DWT’s reserves between the rivers Tees and Tyne.

That same day, the Centre played host to a group of around 50 members of the Chinese community from the Exeter area; a visit arranged by Exmoor National Park and Hikmat Devon CIC. The group enjoyed a talk by Linzi about Exmoor ponies and the work of MMT and the Pony Centre before meeting the ponies for a chance to cuddle and groom and concluding with sandwiches and cake in the Green Room. Everyone said how much they enjoyed the visit and many said they would come back and bring their friends and families.

The Exmoor Pony Centre is always pleased to welcome groups to see the work of the Moorland Mousie Trust, our parent charity, at first hand and learn more about the Exmoor Pony breed. The visits are informative and fun with plenty of opportunity for hands-on interaction with the ponies. In the past we have welcomed U3A and community groups, student and school groups and adult learning groups. If you are interested in a group visit please contact us by email or phone to discuss.

Our volunteers enjoyed a belated Christmas Social recently to catch up on plans for 2017 and to get together and meet others who share the same passions. We have a wonderful and devoted team of volunteers helping with a variety of tasks from ponies to admin to fundraising. We are always in desperate need of more helpers so please do get in touch if you could spare any time to help the charity. You will find a warm welcome!

The Centre will re-open to the public for visits on Monday 13th February and will be holding the first Activity Afternoon of the year on Thursday 16th February to include pony rides, grooming, refreshments and family fun. Treks and Riding sessions will resume at the end of March. Our April Activity Day will be on Sunday 9th April from 11am to 3pm. Our full schedule for 2017 is on our website. We hope you can join us.
Posted by Gail Crane at 09:20 No comments: