Yuk! Has someone spiked my water? 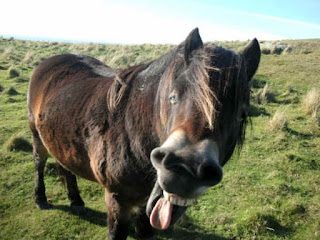 This is Thistle, one of the 13 Exmoor ponies that conservation graze on Traprain Law near Edinbugh. He's probably just caught a whiff of something in the air, hence the lip curl, but it looks for all the world as if he has tasted something nasty.

The photo was taken by Liz, the volunteer pony checker, who visits them daily to make sure they are are all fit and well.

Anchor ponies being herded down the  lane from Mounsey Hill Gate towards Ashwick. They were all rather strung out this year so not such a good photo as a couple of years ago when they came down bunched together.

This is Ben, the border collie standing guard over his 'flock'.
He belongs to Liz, volunteer pony checker for the Exmoor ponies on Traprain in Scotland and, as you can see, he takes his duties very seriously. 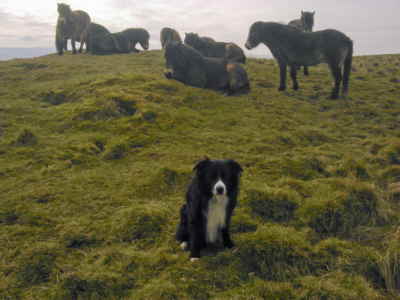 Thanks to my generous sponsors, I'm almost a third of the way to my target with another month still to go!

These are some of the foals who will be over-wintering at the Pony Centre.

Have you ever heard of NaNoWriMo?   No?  Well, I confess it has very little to do with ponies - but, please, bear with me.

It stands for National Novel Writing Month and every November a lot of crazy people shut themselves away to write a 50,000 word novel in 30 days. It's something I have always promised myself I would do but have always managed to find an excuse to chicken out of.

What I needed was an incentive. So this year I am stepping up to the challenge in aid of the Moorland Mousie Trust and Exmoor Pony Centre, to raise funds towards their £5,000 winter feed and vet bills.

Every donation, however small, will make a real difference, so please consider sponsoring me. I'm a short story writer, not a novelist, so this will be a real challenge for me.

Visit my Just Giving page for more information, or go to my Blog to find out more about me and follow my progress.

Finally, many thanks for reading this.

October at the Pony Centre

More of our ponies have found happy lives away from the centre; some on conservation grazing sites and others at foster homes. One of our very special little characters Monty, aka Jenny’s Prince from herd 23 on Withypool, has gone to a home near Bridgwater keeping company with some Shetland ponies. For once he is the biggest pony in the paddock! He was always a super star and right until the moment he drove off down the lane he impressed us by loading beautifully into a large horse lorry with no hesitations at the size of it and the ramp he had to climb!

Four of the ten yearlings we took in over the winter have already been gelded so we were able to offer them space with a group of ponies travelling north to live right at the top of England near Rothbury in Northumberland. We would like to thank Alan Walters Horse Transport for a superb professional job of getting them safely to the other end of the country. The entire group of nine ponies have all settled well at their new home.

Sometimes we are called on to help where people are unable to keep their ponies.  This was the case when Leicestershire Wildlife Trust was unable to keep their herd due to difficulties in managing their vegetation supply. We collected their five ponies and sent them north to Juliet Rogers at our northern base where they have been re-homed at a wonderful conservation site.

In early May we sent three ponies, Igor, Ivan and Titch, to graze with Gloucestershire Wildlife Trust at a lovely site called Wigpool.

We have also been receiving fabulous updates about our foster ponies around the country, who are undertaking all sorts of jobs some taking part in pony club activities, others doing agility and proving what a wonderful versatile breed the Exmoor pony is.

Our next open day is celebrating Halloween. Come and see us on October 27th, 12-3pm and enjoy all the usual activities. Groom a pony. Have a ride. Enjoy refreshments in the Green Room. We look forward to seeing you! 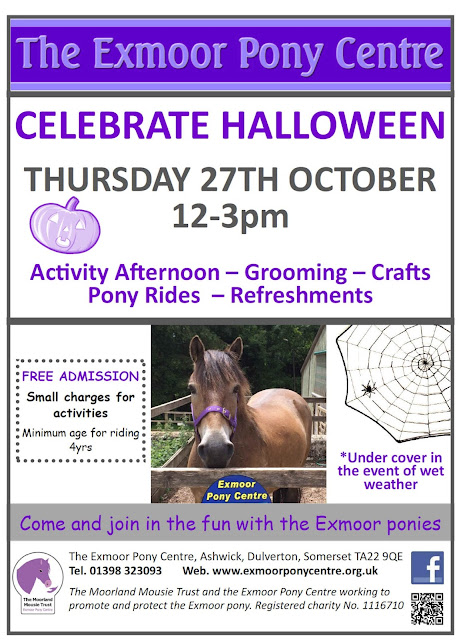