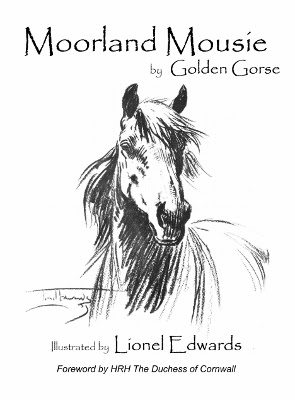 'Moorland Mousie' is the title of one the earliest fiction books about ponies written for children. Published in 1929, it was written by Golden Gorse (the pseudonym of Muriel Wace) and illustrated by Lionel Edwards.

Muriel Wace was born in 1881, one of five pony-mad sisters. In 1911, she married and moved to Somerset where she became involved with the Exmoor ponies that inspired her to write her book.

Mousie is a spirited young Exmoor pony who, after running away with his rider, is sold. In Black Beauty fashion, the story follows his adventures as his life goes from bad to worse until, finally, he is rescued and finds happiness again.


An apt name, therefore, for a Trust that was set up to rescue young foals and give them a better life.

Posted by Anonymous at 13:05 No comments:

Freddie Does a Runner

We were accompanied, at least for part of the Sponsored Pleasure Ride, by two Exmoor ponies who travelled from Northumberland to be at the event. The plan was to assess one of them, Freddie, for a permanent move to the Centre.

Maybe we should have taken it as an omen when Freddie took fright at the flapping tent side on the start line, deposited his rider, and went to join the trailers and horseboxes; presumably to hitch an early lift home!

However, we gave him the benefit of the doubt. He was remounted without incident, and seemed to be enjoying being back on his birthplace - until, about half way through the 15 miles, a large horse with even larger teeth came up close behind and bit him on the bottom!

Freddie was not amused. He jumped sideways under some trees. His jockey leaned forward to avoid the branches, and subsequently exited via the front door over Fred's shoulder! The custom of bottom biting not being familiar to Freddie, he disappeared across Winsford Hill, complete with saddle and bridle, to join a small group of his wild relatives, and was last seen heading north in their company.

Perhaps he needed to settle his nerves with a pint, but just how he got to the Royal Oak in Winsford, only Freddie knows. Thanks to his jockey's athleticism they were reunited, none the worse for wear, and with only one broken rein.

Needless to say, Freddie's return ticket to Northumberland was promptly booked, and any rumours that we have started a new equine sport of catapulting riders into orbit can be categorically denied!
Posted by Anonymous at 13:16 No comments:

In May five ponies and volunteers from the Exmoor Pony Centre took part in the sponsored Pleasure Ride, which formed part of the Golden Horseshoe Endurance Event, to raise funds for the Moorland Mousie Trust.

Dylan and Yorrick strode out with their long legs while Abbi, Rama and Sherbert went at their own individual paces, but kept up very well, and we all completed the course together. We are just waiting to hear how much we have all collected from the sponsorship money.
Posted by Anonymous at 18:33 No comments: